The mission of Africa Streets is to create an open public platform in support of sustainable transport and sustainable and fair communities across this great and needy continent.

Unconstrained by bureaucracy, economic interests or schedules, Africa Streets is being launched as a wide open international platform for critical discussion and diverse forms of cross-border collaboration on the challenging, necessarily conflicted topic of “sustainable transportation and social justice”.

Africa Streets is free for all and does not accept advertising. Its continuing publication will depend on the support of individuals, foundations and public agencies who believe that we are doing a necessary job.

If you wish to support Africa Streets, including working as a volunteer collaborator, get in touch here.

The following  statement appeared in January as part of our 2010 work plan for World Streets. It is to be edited and presented here as useful: 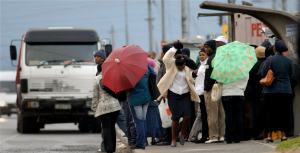 In a fair world it should be impossible to ignore close to one billion of the poorest people on the earth living in its second-largest and second most-populous continent. With already one-third living in cities, most of whom in slums, with the flow of people from the country side continuing at record rates.

The transportation arrangements in most people’s daily life in Africa come in several flavors: ranging from world-class traffic jams making it close to impossible to negotiate the streets of the larger cities for hour each day, to at the other extreme no provision for vital survival transport (water, wood for fires, food) for the remainder of the continent. 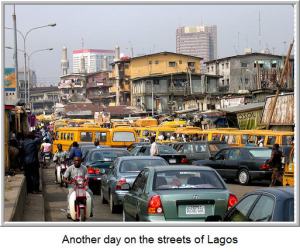 Now the fact is that most of transport policy and investments on the continent are aimed at the creation and extension of motorized transport infrastructure. And it is precisely this strategy that had led to the present imbalance.

The key to unlocking the African Streets challenge can be summed up in a single phrase: Fair transport for women and children. What works well about this, is that when women and children are fairly served everybody ends up being better off. This can and should be our central theme

So, in 2010 World Streets hopes to do what we can to give far more attention to the challenges and accomplishments of fair transport in Africa.

Share Transport in Africa: Another international project for 2010 that is already getting interest in a number of African counties (Nigeria, Senegal, Tanzania, Namibia and South Africa among them) – is the World Share/Transport Forum. Shared transport is a long and honorable African tradition and for many often the only way of getting around longer distances. That said, it has not been favored or understood really by policy makers in the field. Our collaborative international program is intended to address this gap. Reference: www.COST.ShareTransport.org

Here is our Africa challenge in a visual nutshell. This map records the geographic distribution of people who checked into World Streets this morning: 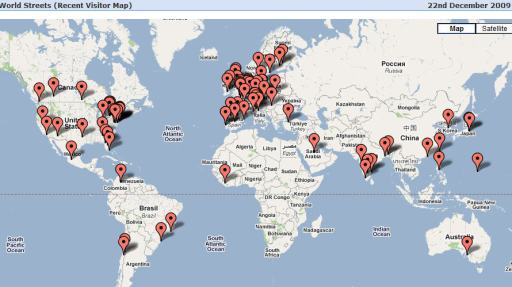 At this point we are not sure of how to best make our contribution. Certainly it will be important (a) to have more feature articles on “African Streets”, in the 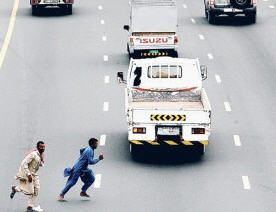 hope of creating higher quality information and a stronger network of people and groups who can help African cities and rural areas move toward world-level sustainable transport policies and practices. And no less important (b) to see if we can find ways to get copies of Streets and its messages onto the desks of planners, decision-makers, operators, citizens and national and local government officials.

As we look at the overall situation of transport in Africa, we can see at least one “huge shortcoming” in terms of 20th century “modern” transport that, with a bit of strategy, one might well turn into an asset. And this is the enormous variations in terms of ownership, which vary from OECD range levels (anywhere from 300 – 500 per 1000 capita) in the more prosperous cities all the way down to barely one or two in the bottom range running from Rwanda to Malawi.

And since the motor vehicle has turned out to be both a solution for some and a problem for all, this gives the policy makers an interesting window to come up with something better than the old private car solution. An important part of that is of course going to involve sharing.

going on and what could be done better. We presently have participants from South Africa, Tanzania, Kenya. Uganda. Namibia, Nigeria, and Egypt, and are in contact with the GATNET network for transport and gender which has a strong African orientation, as well as several UN programs. It’s a start.

Would you like to join this task force. If so, all you care to do is click here and let us know who you are. The rest can follow.

This entry was posted in management, World Streets. Bookmark the permalink.